NOTE: This event was originally scheduled for Feb 10th but was moved one week due to the Snow Storm

Thanks to our friends at Music Box Films we have 8 tickets for a special sneak preview of the film LORE, followed by a discussion of the film.

**ONLY 8 seats available for the first 8 EuroCircle members to RSVP.

The year is 1945. Left to fend for herself when her SS officer father and mother, a staunch Nazi believer, are captured by the victorious Allies at the end of World War II, Lore, a fourteen-year-old German girl (striking newcomer Saskia Rosendahl) must lead her four siblings on a harrowing journey across a devastated country. When she meets the charismatic and mysterious young refugee Thomas, (Kai Malina, The White Ribbon) Lore soon finds her world shattered by feelings of hatred and desire as she must put her trust in the very person she was always taught to hate in order to survive.

Lore is the second film from Australian writer/director Cate Shortland (Somersault), and was Australia’s official selection for the 2012 Academy Award for Best Foreign Language Film. It was nominated for 8 Australian Academy of Cinema and Television Arts Awards.

The film was adapted from Rachel Seiffert’s novel The Dark Room (Booker Prize finalist), which is being re-released as Lore by Vintage Books in conjunction with the film’s theatrical opening. 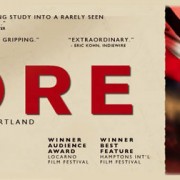