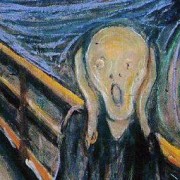 Edvard Munch, the iconic Norwegian painter, one said “Death is pitch-dark, but colors are light. To be a painter, one must work with rays of light.”

Walter Leistikow, “Die freihe Bühne” (German magazine) said about Munch that “Great poets and painters are seldom understood at first, seldom honoured. They can be glad if they are not shown the door and politely thrown out, like Mr. Munch…”

Munch looked at things in a distinctively different way from many artists of his time. I always felt that he saw only the essence and, consequently, painted only that. That’s why some people have taken such delight in saying his pictures appear to be ‘unfinished’. I disagree. To me his paintings are finished. Obviously I am no painter, nor critic but I loved his sad paintings even in high school. Must be the Nordic blood in me. I guess we all can agree that art is ‘finished’ when the artist has said all that he really wanted to say. I always thought this was the advantage Munch had over his generations of painters. His unique ability to show us how he felt and what truly gripped him, making everything else seem unimportant.

Munch had extensive art production during his 80 years. Norwegian travel tours provide a good introduction to Munch and his art combined with idyllic fjord life, small coastal towns and the proximity to the capital. There has never been a better time to visit one of Europe’s coolest capitals with the upcoming Edvard Munch jubilee in 2013.

Munch’s bequested to the City of Oslo around 1,100 paintings, 15,500 prints, 4,700 drawings, six sculptures, his graphic printing plates as well as some other objects. All of these works went into the collections of the Munch Museum. To understand how productive Munch was let’s just say those works represented more than half of Munch’s total production.

Even if you are not interested in art – and know nothing about Edward Munch you may have heard about The Scream sale at Sothesbys in New York. Sotheby’s sold a version of Edvard Munch’s masterpiece ‘The Scream’ in New York City on 2 May 2012, at the final sum of nearly $120 million. That is correct, $12o million for one painting!

The iconic “Scream” is one of the most instantly recognizable images in art history and also popular culture. Many have said it is almost as recognizable as the Mona Lisa. The current version of The Scream (which dates from 1895) is one of four versions of the composition. Incidentally it is the only version in private hands. The painting has been in the collection of the Olsen family, a ship-owning dynasty, for over 70 years. The Olsen family were neighbors of Edward Munch at Hvitsten in Norway.

“I was walking along the road with two Friends /the Sun was setting – The Sky turned a bloody red / And I felt a whiff of Melancholy – I stood / Still, deathly tired – over the blue-black / Fjord and City hung Blood and Tongues of Fire / My Friends walked on – I remained behind / – shivering with Anxiety – I felt the great Scream in Nature – EM”
– The artist’s hand-painted inscription on the frame of the present work

The life of Edward Munch was not entirely a happy one – but it was a life well worth of living. His legacy is unbelievable. If you visit Norway, do not miss Edvard Munch!