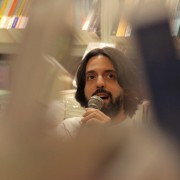 Join EuroCircle and BU Center for the Study of Europe for a reading and conversation with prize-winning Spanish writer, poet, essayist, and translator Andrès Neuman!

Neuman is the author of El viajero del siglo (published in the US as Traveller of the Century by Farrar, Straus, and Giroux in 2012), winner of the Alfaguara Prize and the National Critics Prize and selected among the books of the year by the critics of El Pais, El Mundo, The Guardian, The Independent, Financial Times, and by the Dutch newspapers NRC Handelsblad and De Volkskrant. This novel was later shortlisted for the Independent Foreign Fiction Prize, the Latino Book Award, the Romulo Gallegos Prize (given to the best Spanish language novel published during the two previous years), and also longlisted for the Best Translated Book Award.

The event will be moderated by Alicia Borinsky, Professor of Spanish at Boston University. Like Neuman, Borinsky was born in Argentina. She is a fiction writer, poet and literary critic who has published extensively in English and Spanish in the United States, Latin America and Europe.

This event takes place as part of our “European Voices” series – an ongoing series of conversations with artists and writers, activists and intellectuals exploring questions at the intersection of politics and culture. Co-sponsored by the literary journal AGNI and the Department of Romance Studies at Boston University. Funded in part by the European Commission Delegation in Washington DC.