EuroCircle and Sunny Side Up are excited to present: CARNAVAL 2011!

We were samba’ing to the wee hours of the morning at last year’s inaugural event- so we decided to do it again this year!! Join us in bringing the sexy and sultry sounds of samba, soca, calypso, world music and more to Chicago’s HOTTEST international crowd!

Featuring the GLOBAL CARNIVAL GROOVES of:

Got cabin fever? Tired of staying inside for fear of frostbite? Want to strike the term “wind chill” from your vocabulary? Worry not! For one night only EuroCircle and Griffin Lounge bring the beach to you, sending the mercury straight up with a six hour heat wave of global grooves and sunny vibes plucked from the beaches the world over!

JOHN GRAMMATIS
Straight off the plane from his latest tour of the Greek Isles, Grammatis dusts the sand off his records just in time for his for first main land gig in 2011. Expect the latest in the European club sound – terrace style!

ARMAND PENA
From his 2002 white label remix of Lenny Kravitz Going my way Armand meets penton mix to his original song Brazilian Drums with release reviews such as “It’s a hot slice of progressive tribal that’s getting lots of support from Danny Tenaglia, DJ Vibe and Trendroid.” Famous from his routes throughout the clubs in Ibiza , you can expect major heat stroke after dancing to his beats.

JOHN CURLEY
EuroCircle resident for years now, Curley’s been melting ice in Chicago over a decade with his luv dup style of European house with a Chicago flare!

FREE CD TO FIRST 100 GUESTS- GET THERE EARLY!

BEACHCOMBERS COCKTAILS – $7 (what kind of vodka?) Drinks All Night Long

Standing out amidst other Flatiron lounges, Taj II has a distinctly Asian vibe combined with a sophisticated, urban setting. With opulent decor such as hand carved teak, intricate woodwork, sandstone dancing shivas and a magnificent mahogany and copper topped bar, the Taj will transport you to the ultimate luxury of nightlife inspired by India.

Let’s unwind after work and sip a few Eurotinis at this chic mid-town lounge. We’ll enjoy some delicious hors d’oeuvres and drink specials, and as always, great Eurocircle company.

Members who purchase their tickets online and bring their Ticketleap receipt will receive a $50 gift certificate to PinkCalyx.com jewelry. 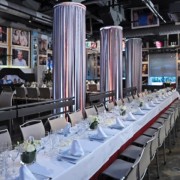 Come and mingle with other international professionals and entrepreneurs in an exclusive atmosphere. We have booked the downstairs Bar/Club in Danzarama entirely for ourselves from 8.00pm until midnight. The Club has a warm, homey ambiance, emphasised by low lighting, stone walls and arches, which give it the feel of a traditional bodega with a contemporary flair. Enjoy a fantastic selection of cocktails, accompanied by a tasteful selection of chill-out and lounge tracks in a unique and cosmopolitan setting right in the centre of Barcelona.

This is the perfect opportunity to meet potential customers, partners and investors, or just mingle with other professionals and entrepreneurs to exchange ideas and expand your network of friends. We will also have a ‘Business Corner’ where you can put your flyers on a table in order to promote your business among the other guests.

Feel free to spread the word among your contacts but don’t be afraid to come alone because I will introduce you to other people.

Don’t forget to bring your business cards and try to be punctual as doors will close at 11.00 pm.

Whether your reasons for networking are professional or personal, this is the event in Barcelona to meet the right people. You’re guaranteed a fabulous time!

ICE BAR LAUNCH!!
Our favorite summer venue is now a winter wonderland! Join us for the debut of Vertigo’s all new ICE BAR- the only ice bar in the city! (The indoor bars of course will be open for those of you who are used to warmer climes…:)

GRAB A BLANKET and CURL UP WITH A EUROCIRCLER!
We”ll have plenty of roaring fires, blankets and heat lamps- so grab a fellow EuroCircler and warm up! That’s what we call networking!

2011 RESOLUTION- MAKE NEW FRIENDS!
We will help you keep this resolution- and maybe break some other ones!! 🙂

Gilda’s Club Chicago is a free support community for men, women, children, family and friends whose lives have been touched by cancer. Call 773.327.5252 for tickets and tell the box office you’d like a “Gilda” ticket*, and $1 of each $14 ticket you purchase will be donated to Gilda’s Club Chicago! Enjoy the show and support Gilda’s Club – it’s a win-win. Visit www.chicagosketchfest.com for the complete schedule and info.