Don’t miss out on the second installment of our “Global Grooves Thursday” series, this week at Crimson Lounge located inside the Sax Hotel!

We are very excited to host this event with our friends from “Chicago Italians” for a taste of Italy!

We will also be collecting donations for the victims of the recent earthquake that devistated the Abruzzo region in central Italy. The donations will make there way to the victims through the National Italian American Foundation in Washington D.C. www.niaf.org

**Global Grooves Thursday events are GRATIS…beverages however, are not…:)

Paddy was tooling along the road one fine day when the local policeman, a friend of his, pulled him over.
“What’s wrong, Seamus?” Paddy asked.

“Well didn’t ya know, Paddy, that your wife fell out of the car about five miles back?” said Seamus.

Saint Patrick’s Day parade in NY is well known in the world. In a typical year, 150,000 marchers participate in it, including bands, firefighters, military and police groups, county associations, emigrant societies, and social and cultural clubs, and 2 million spectators line the streets. The parade marches up 5th Avenue in Manhattan and is always led by the U.S. 69th Infantry Regiment. New York politicians – or those running for office – are always found prominently marching in the parade. Former New York City Mayor Ed Koch once proclaimed himself “Ed O’Koch” for the day, and he continues to don an Irish sweater and march every year up until 2003, even though he is no longer in office.

The parade is organized and run by the Ancient Order of Hibernians.[citation needed] For many years, the St. Patrick’s Day Parade was the primary public function of the organization. On occasion the order has appointed controversial Irish republican figures (some of whom were barred from the U.S.) to be its Grand Marshal.

Don’t miss the extraordinary performance by Jaklina. She will be performing around midnight.

We’ll have a belly dancing contest for the talented ladies.

Also on 12th floor terrace, there will be Hookah Service (for an additional fee, not included with admission fee).

Jaklina – www.jaklinadance.com
Sounds from afar beckoned. Infatuated with the haunting rhythms of the East, Jaklina embarked on her artistic and spiritual journey into the intoxicating world of belly dance. Jaklina’s love for the ancient, transformative, and sacred art of Middle Eastern Dance has led her to study at the Temple of Jehan with internationally known choreographers and and performers Jehan Kamal of Goddessdance and Elsa Leandros of WorldDance Workout. As well Jaklina has studied with established performers Mohamed Shaheen, Gamila El Masri, and Altagracia.

Jaklina can be seen throughout top NYC venues as well as other cultural and artistic performing arts centers. She also had the pleasure of studying and performing in Egypt and sharing the stage with global musicians and dj’s Cheb i Sabbah and Zeb Visini. As a member of the Temple of Jehan and the dance troupe Caribbean Roses Jaklina incorprates various dance styles in her expression. Statuesque at 6’2 Jaklina’s performances create a unique visual entertaining experience. In addition to performing Jaklina also models and has been featured in the television series “Gossip Girl, ” “Wife Swap” and “Fashion Fever”. Dancing is her emotional and spiritual vehicle through which she expresses and radiates ultimate joy and freedom. “I’d rather be dancing… wouldn’t you?” 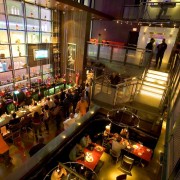 Our event last month at the W Buckhead hotel was great but I anticipate an even better crowd for our upcoming event.

We will have it next Tuesday, March 3rd at AJA, formerly Emerald’s restaurant, located at 3500 Lenox Road (Alliance Center, Suite 100). Start time as usual will be at 7:30.

I have also arranged for free appetizers (NOT full dinner), so this should be a fun-filled event. Personally I think this is a great venue and perfect for our group. We will have our own section located in the right back corner from the entrance by the side bar.

Looking forward to seeing everyone next week.