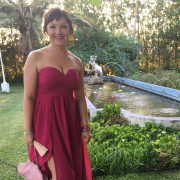 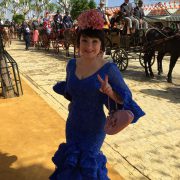 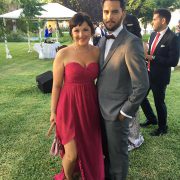 What took you to Spain?

Love and a lifelong dream to live abroad. I took a step into the unknown. Travelling has been my passion since I was a little girl. I’ve travelled with my parents, my friends and by myself to many different places. However, most of my trips –very typical for a Finnish person– have been to the sunnyCosta del Sol – Malaga area in Spain. Who wouldn’t want a little escape from the cold, dark Finnish winter?

I discovered Seville through my best friend.We met when she was doing her Erasmus practice at an English speaking kindergarten where I worked. When her Erasmus period ended she returned hometo Seville. We stayed in touch and I visited her during all my vacations.

Why did you decide to move to Seville?

Two years ago–during my summer vacation– I was once again visiting my friend. I had just broken up with my boyfriend of ten years. She and I decided to go out to a party after dinner. My friend also wanted to say hello to her boyfriend who was meeting with his friends just around the corner.  There I met this handsome, amazing Spanish man who became my boyfriend. After that night we never stopped talking. Afterfour months of long-distance dating, I decided to make my dreams come true and move to Spain. I packed my bags and after Christmas 2014 I jumped onaplane to start my new adventure.

How did you find work?

My friend advised me that there’s a lot of work in Spain as an English teacher. I needed to take only one month-long English Teacher for foreign people course in a private school, and after that there would be plenty of work. I found the course on the internet, went to the interviews before I moved to Spain, and I prepared myself. I was accepted, but the course cost 1500euros. I decided to take a loan, to pay my first months living there without salary and to pay for the course. We were already looking for apartments with my boyfriend and found a perfect flat in the suburbs of Sevilla, ten minutes with a metro to go to the city center. Everything was perfect.

I took the course in CLIC INTERNATIONAL HOUSE of Seville. It was super-intensive course where I actually had to teach Spanish people who paid for that English course. Meanwhile my teachers and course-mates were observing me from the back of the class. It was the most stressful and sleepless month of my life. I was working 24 hours. Some nights I didn’t sleep because I had to prepare the next day’s class.

I struggled through that and got my certificate. Now I only needed to find a job. My friend was right: there were many academies and work positions. Luckily the course prepared us well, telling us the minimum salary we should accept.

After only four days of looking for work, I got a call and I was asked to go to an interview. I was so surprised and relieved andIfelt lucky that somebody called me.

I got a job in an English academy, teaching English to university students. I was happy. Now I only needed to do all the paper work in the immigration administration.

No problem, I thought: I’m from Finland, part of the European Union.

I went there with my boyfriend, since I had no idea what I needed to say because my Spanish during two and a half months hadn’t developed much beyond the basics I had learnt in Finland.

I was absolutely amazed how inefficient the system is in Spain. I had to wait 30 minutes, then I had to leave to take more copies of some papers that I had, and come back. Then finally I had to go to pay the whole process to a bank, because in the administration places in Spain are not allowed to receive money because is possible that somebody of the workers can steal it. My mind was blown. What is this country? I was even asked if Finland is part of European Union.

After the whole morning going back and forth with the papers I finally got my Spanish ID “NIE” that unfortunately was only for three months. And after that I would have to go through the process again.

What about working conditions?

I started to work and I was happy and satisfied with my job, I could be totally independent and teach in my own way with materials given. It was fun. The only bad thing was that I was working until ten at night. After a while I got used to it. I also had to change my classroom during the day to another part of the city, commuting by bike. But I did it and I didn’t complain, at least I had a job.

The problems started around the payday. I got my salary in an envelope, but only after waiting three hours and my boss “accidentally” losing my money. I remember I was so upset. I couldn’t believe that in a European Union country this can happen.

I got over my shock and I continue working there, now I had understood that this is how Spain works, people don’t pay taxes so there is no workers’ rights and no guarantee for you to even get your money. So I was happy that at least finally I got paid every month.

The more we were going towards summer the less hours I got, because university students of course are not so keen on studying during the summer. Then one day I was going to the academy to have my lesson, it was the last days of the course. I opened the Academy door, and there was nothing. I mean absolutely nothing. No pictures on the wall, no desks, no posters, nothing. An empty hallway. Once again I was surprised, so I waited at the door and called if there was anyone. Then my boss came from one classroom, asking me very rudely in Spanish what I was doing there – the academy is closed. I explained to her that I still have my course going on with my students.  She didn’t remember, she told me I could use one of the other classrooms. I agreed and started preparing my class and awaiting my students. After ten minutes she came again and said to me that if all of the students from my group (total six students) don’t come today she is not going to pay my salary. They believed it is my responsibility to make sure all the students participate.

I tried to explain to her that the students are having their exams at the university at the same time. Obviously there is nothing that I can do to force an adult to participate.  Finally three of my students arrived. I gave the lesson. Then I had a fight with my boss. Later at home when I told my boyfriend what happened he called her. My boss sent me a message that I am not needed anymore on Monday. Thank you and bye. I was relieved. I didn’t need those kinds of problems. It was time for a change. There are so many other places. The only bad thing was that summer had just started. All the academies were closing during the months of summer.

I was unemployed the whole summer, struggling and looking for something, anything.  At onepoint I was ready to give up, pack my things, and return to Finland.  I didn’t want to do it, after all the problems with work here the quality of life was so much better than in my home country. The weather, culture, and people were all things that kept me fighting. Finally I was lucky and got a job for Julywitha summer camp for children. Then I got another job offer for September from a kindergarten. I was very happy for that too, because I graduated as a practical nurse in Finland and I was working in a kindergarten there until the day I moved to Spain. Then I got another job offer too in another English Academy teaching children. I was happy. Now I have two different jobs: mornings in the kindergarten teaching English and afternoons in the English Academy working with kids and adults.

How is the situation now?

I worked 12 hours a day last year with my two jobs. I loved it and I still love the work I had in the mornings in the kindergarten, the only minus is that they pay such a ridiculously small amount of money that with only one salary I can’t live. That’s why I need to work in the afternoons as well. I had one hour to eat and change my clothes during the jobs and continue work. I was exhausted after my working days, but I had no other way to live. Imagine working from 10 to 22 everyday except weekends. Now I will continue at these jobs this year with fewer hours in the evenings. I asked my boss in the academy if he doesn’t mind giving me only the children’s lessons. I’m getting fed up with the adults. He had no problem with that. I am very happy with the conditions in both places. In the kindergarten they even pay me my vacations three weeks during the year. That doesn’t happen very often in Spain. My boss at the academy is a very reliable person andI haven’t had many problems with the kindergarten, either. They always pay me eventually.

What would you want to say to people who are dreaming to move to Spain?

Go for it, but just remember that under the sun here is routine too, and hard work. You can´t compare it with Finland. The system here doesn’t work well. Working conditions aren’t very good. But if you are open-minded you can manage. If you are willing to work your ass off and fight towards your happiness you can do it. If you speak fluent English you will find a job easily. Remember to trust yourself and take the big step to the unknown, you won’t know how your life will change if you don’t give it a chance. I wouldn’t change anything. I have visited home many times and of course there are days I miss my friends and family and things from Finland but it’s not enough to make me want to go back. I feel at home in Spain. Life in general is much better and fun, not to mention cheaper than in Finland.

What about Spanish people?

Spanish people are really welcoming and really warm people. They are nice and even if they don’t know you they treat you like a friend.

What is typical Spanish in your opinion?

Typical Spanish is that lunch is the most important meal of the day, and after that comes siesta. Unless you are working, siesta time is laid-back, whereas driving in Spain involves honking and yelling. People can be judgmental and of course you will always be “guiri” (a foreign person) to them.

On The Couch: The Most Psychiatrists Per Capita in Europe
This site uses cookies: Find out more.
Scroll to top