Traveler bio: Jeff came to EuroCircle through a romantic relationship, so you could say he’s like the boyfriend you stay friends with after the girlfriend left. He’s a technologist, graphic artist, and strangely enough, brings both an academic knowledge and caveman sensibility to our travels. When we reviewed our African itinerary, we quickly realized we were unprepared for the remote wilderness of the Okavango Delta, Kalahari desert, and Nata. But Jeff, an avid outdoorsman reassured us, we could survive without hair dryers for a week. EuroCircle’s African Safari, 2015 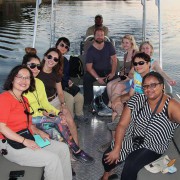 Jeff, unlike most of our members, you haven’t traveled much outside the USA. What possessed you choose EuroCircle’s African Safari, 2015 as one of your first adventures abroad?

I figured I should go big, or stay home. I mean, now that I’ve been to Africa I feel like I can go anywhere.

Be honest, what did you think of our group of travelers?

I think we quickly became like a family unit. That’s not to say we weren’t dysfunctional, but I know we looked out for one another, and had to accept each other, warts, dirty wash, and worse.

Being in a social group that’s bound together by logistics and miles of savannah, there’s no channel to switch or website to keep you in your comfort zone. I love that. We had to engage with each other as people. Sometimes the scarcity of choice brings about an abundance of value.

Of all the travelers, you seemed to be the most easy-going, and laid back. Nothing seemed to bother you. Are you like that in real life, or was that your strategy to get along with the various personalities?

I try not to “sweat the small stuff.” Of course one person’s small stuff is another’s civil war, but I felt we were a good hearted group, for everything else there is always headphones.

What was the funniest thing that happened for you on this trip?

“Oh my god, a lion!” Or a donkey, it could be a donkey. “Ah, a snake, look a snake!” Or I guess it could be a stick. The adamant misidentification of animals was definitely a high-point of the trip’s comedy.

If you could re-live one day of EuroCircle African Safari, 2015, what day would that be?

From an adventurous perspective I’d say being among the elephants in the Maun, but in truth, two times during the trip, once at the Thamalakane River Lodge and the second time on the Chobe river, I had a chance just to feel… it’s hard to put into words, and please shoot me if I say “one with nature” but I felt like just another mammal, and it was a good feeling. In our dominance as a species we’ve killed off the large mammals in Europe and America, and I miss them. There was a certain rightness being among them. Not in a Disneyfied way, but as fellow creations of evolution on this planet.

If I could stay in one moment, it would be that sensation. The smell of the soil and grasses, the setting sun streaming through the trees over the river, life was everywhere and I was a part of it!

As a single man, would you rather bring a significant other, or next time, join us solo?

Blow up doll? Did you mean to ask to go solo or bring a girlfriend? In a way I had the best of both worlds. Maryana and I grew close again during the trip. I think the answer is whatever enhances the experience. I mean, one can fight with their girlfriend any place, but kissing someone in front of Victoria Falls is another thing all together.

EuroCircle Travels is an annual program, that takes our members on a global adventure. So far, we have explored the silk markets of Istanbul, trekked to the top of Machu Pichu, raced tuk-tuks in Siem Reap, Cambodia,, and sailed down Halong Bay for an unforgettable experience. As a group we experienced dune bashing in the Arabian Desert, UAE, dined in a palace in India, then trekked across 5 countries in Southern Africa on safari. Join us!