I absolutely love French chansons and back in Finland still have tens of albums (yes, actual LPs) of Edith Piaf, Mireille Mathieu, Joe Dassin etc. If I lived in Los Angeles, I’d love to see these guys perform. Well, judge yourself! They are all very talented musicians. 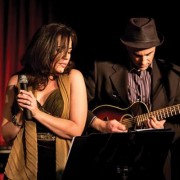 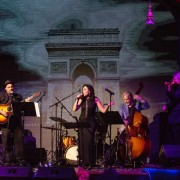 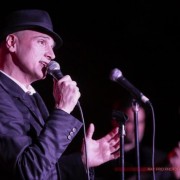 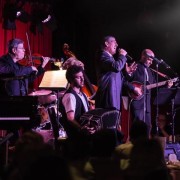 Julia and her Russian guitarist-singer husband recruited two other vocalists—one French, the other Moroccan-born and Israel-raised. They added a Hungarian-American violinist, a Broadway-seasoned pianist, and a pair of L.A. veterans: a drummer and an upright bass player.

Together, they perform original renditions of French favorites and add in Russian, Italian, Spanish, and other world flavors.

“Francophiles from all over the world come to see our shows. When I started this band, I had no idea there were so many people who loved French music. I never imagined the cross-cultural, international mix.  On any given night, the crowd may include Romanians, Russians, Lebanese, Israelis, Armenians, Moroccans, Persians and Francophones from all over!”

Paris Chansons just released their original song, “Bamiyan” which is a tribute to peace and hope.

Bamiyan is the place in Afghanistan where the enormous statues of the Buddha were destroyed by the Taliban in 2001.  This song is about what can never be destroyed – faith and hope.

Jacob Kantor originally wrote the song in English and they recently collaborated with a French songwriter, Zera Vaughan, who re-invented the lyrics into French.

You can hear the band performing at the Catalina Jazz Club in Hollywood, the Sofitel, Vibrato, and private and corporate events all over.

For more information, please visit:
www.parischansons.com
Join us for free and get invited to events in your city