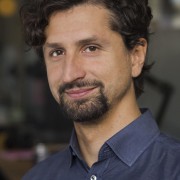 Hi, I am Mikael Kopteff and I’ve been working for Reaktor for six years now.  For the last year I have been the CTO of their New York Office. Before that I did a lot of things related to programming, recruitment and general consulting.

Reaktor is a creative technology house.   Our focus is in taking on extremely difficult projects and creating exceptional products and services for our clients. What it usually means is that we create software that our clients don’t have the expertise or the time or the resources to create otherwise without us.

And we have clients in all types of industries like finance, retail, media, communications, airlines and the like.

We have offices in New York, Helsinki, Toyko and we have about 350 people.  One of the more interesting things is that we are what you might call a flat hierarchy or low hierarchy, so we don’t have a strict hierarchy in how our company works.

Is there one part of the business that you would highlight or focus on the most or just in general?

For me personally, I am quite focused on the media industry, so I work with several different media companies within Finland as well as in the US. In the US we work for companies such as HBO for instance.

What is very interesting and hot in the industry right now that’s cool is that we have created inflight entertainment systems – basically inflight services and things related to that – and that has been something that is on the rise. We do have several different smaller things we do, like we have a space program for instance.

How do you like it in New York compared to Helsinki? Are there any pros and cons to it being here vs being abroad?

It’s very calm compared to New York. In New York there is always something going on; there are loads of restaurants and loads to do. The energy level is higher in New York and everyone is always going and doing something. So that is one of the key differences for me.

For pros and cons, sometimes in the wintertime in Helsinki there is not that much to do, especially in the city center.  People typically hibernate in the winter in Helsinki whilst in New York, even though it’s winter or even a blizzard a couple of days ago here, things are still going on. People are still doing loads of stuff. So there is always something to do in New York.

How do you think the Finnish Mentality gets along with the New York American Way and how the business world is different? Is it different in your mind?

The fundamentals are pretty much the same. I would say here,since New York is so busybusy, people are very meat and potatoes.  They might have 30 seconds of small talk, and then they get down to business.Whilst in Helsinki there is a certain type of small talk culture nowadays, but it’s more slow paced.

One thing that’s sort of in the New York business culture is that people tend to switch around meetings all the time, and “I am sorry I did this to you”, or “we switched around this time for discussion.”

That happens very often to me in New York where people will change times of meetings and discussions and so forth several times, and that is something I’ve found is quite different.

In Helsinki, if you book, you know three weeks in advance and nobody confirms it. Here, if you book something one week in advance, people confirm it on the same day because people expect that it might be changed.There is a problem with time management.

The fundamentals of business are pretty much the same.  People want to do business and we discuss similar things as back in Helsinki.

What is the best and worst thing about New York for you and what is a typical day and weekend like for you?

A “typical” day is always hard because I do a lot of things here in New York such as recruitment and meeting with potential clients and existing clients.

So a typical day would be that I would come to work, I might have internal meetings first, and those are very casual because we just talk about some pressing issues. I might have a meeting with a potential client. I might spend half the day at one of our current client’s offices to go through some of the things that they are doing.

I would say there is one interview here or there, like with a couple of potential clients per week, and then plan a lot of stuff with marketing.It’s sort of like we are the landing team here and a CTO title is kind of ambiguous here.  Basically anything that is needed I might step in with, sometimes to where I am boxing shelves and I am putting them together or sometimes we are discussing something very important with senior VPs or I am trying to find some screws for a loose shelf, so it can be anything.

What is the essence of the current city to you and what do you want your friends to absolutely see or feel in your current city vs. your home country?

So one thing that is kind of interesting is I don’t have many friends visiting me here. Helsinki has good restaurants, but New York has a lot of really good restaurants and especially the variety is very good, and I take my friends to many different types of restaurants.

I really like Broadway and have been a couple of times and they have always been nice experiences.

One thing I do go to is surfing in New York, and that a lot of people can’t comprehend.

Today is Tuesday, so yesterday I woke up really early and went to a public beach before work and then I came to work a bit late and you know, it’s a bit snowy and quite cold. When my brother was here I took him to the beach.  People don’t associate New York with the beach.

What do you miss from your country regarding heritage, food, culture, movies etc.?

My ancestry is not purely Finnish. I have relatives around Europe.  Obviously I do miss my family a lot. My mom lives in Helsinki still, so I miss her and of course my friends.

I have made some new friends here. It is always nice to meet new people and create new contacts, but of course the social network that I used to have is very different now.

Before you moved here what did you think about life in New York before you moved? Where there any misconceptions that turned out to be wrong or right for you here?

I did make a lot of business trips before I moved here. So when we opened the office in New York a bit more than a year ago, I was back and forth and had been traveling a year before then, and we started having business here and now have an office here. So I did familiarize myself with New York and I had been here on vacation once also.

Living in New York, this is a difficult question. Obviously in the beginning it was a bit tricky and I was surprised that New York had that much bureaucracy – not too bad but just some things are a bit tricky to navigate, but I guess that’s common for all countries. When you have to open a bank account, or to get a flat.

Would you ever consider moving back there even if part time or full time back to Helsinki?

Well, yes that’s probably in the plans at some point and I don’t even know when or where, it’s kind of open. I am here for now and I will be here until I know the business is stable enough and I am just going to take it one day at a time rather than trying to make plans long term.

So what has been the worst cultural or social issue to deal with in New York for you?

People are a bit different in New York than in Helsinki. Helsinki people tend to be quieter.  Compared to an average Finn –  if there is one – I would be quite loud and talkative. However, in NY I actually mix in quite well.

Some people would say that New Yorkers can be quite rude. I really  haven’t experienced New Yorkers being rude. New Yorkers are a bit thick skinned and there are tons of different types of people.

Is there anything else that you would like to share with us that you haven’t already talked about?

In New York there are definitely loads of things to do and loads of fun things to do, so living here it’s not boring ever. There is always something to do every single day of the week.

If I don’t want to go home and see a jazz gig or see something in the theater or anything, there is always something interesting.

Connect with Mikael and Reaktor: