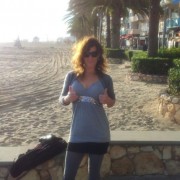 Tell us about yourself – who are you and what would be the short story of your life?

My name is Jamie, and I was born and raised in Atlanta, Georgia. I am a Southern Belle at heart, but have been living away from Atlanta for almost 25 years visiting regularly twice a year. I have a Masters Degree in TEFL and have been teaching for 20 years in Spain. In addition to that, I am also in the Matchmaking arena. I am always on the lookout for connecting people, having new experiences and opportunities, especially ones that can bridge the USA with Spain.

People always ask me what brought me to Spain, the reason is that the very day I finished graduate school in New York, there was a recruiting session for a language training job in Barcelona. The year was 1990, 2 years before the Barcelona Olympics and the position was teaching English to public officials, like the police force, body guards, etc. in preparation for the 1992 Olympics. I applied, got the job and started my profession as en EFL” profesora de ingles.” I taught for 2 years, but went back to New York City before the Olympics, missing all the excitement that even to this day, people still talk about. Funnily enough, the Olympics just after that one was in Atlanta-my hometown, and I missed that one too! After working a couple of years in New York, I decided to go back to Barcelona, and I have been there ever since.

Tell us something how life is different in Barcelona compared to the USA. Work/entrepreneur/unemployed/home environment/customs…what’s different.

Living in Spain is completely different than living in Atlanta or in the US in general. I would say the key differences in everyday life for me are the timetable and the customer service. In Spain, we eat lunch starting anywhere from 1:30-2:00 and finish around 4:00. Lunches are sacred, and rushing through this mid-day meal is almost criminal-like! Dinners are much later than in the USA, starting around 9:00 or 10:00 and sometimes we can see bewildered tourists hovering around restaurants at 6:00 or 7:00 wondering a) why a top-rated trip advisor restaurant is closed and b) why there isn’t a soul yet.

The days are long in Spain and the nights even longer. There is truly more life to be lived.

Customer service is totally different as well. As an American, it is maddening to try and be “right.” Let’s say you have a gripe to make with the electric company, the customer must pay for the call which is rather expensive. Once you complain, there is no apology, no consoling, but rather a lecture! Customers are not inherently right as they are in the US. Shopping is the same way. If you are dissatisfied with a purchased item and want to return it, you’d better have the patience of a saint! You must explain and demonstrate why you are unhappy, which is nerve wracking at times. I tell my friends how I can return an item with no receipt months after a purchase with a credit or even cash and they are in disbelief since in Spain it is practically unheard of to get one’s money back and if you are lucky–a store credit that can expire too soon!

What challenges did you face when you first moved to Barcelona and how did you resolve them?

When I first moved to Spain, there were definitely major challenges like having moved to a bilingual/bi-cultural area and picking up not only Spanish, but Catalan as well, dealing with all of the highly sensitive issues related to using one language or another. A double whammy when moving to a country with language battles is something to be reckoned with, but after time, you get all sides to the story, the situation and learn to be diplomatic and perceptive, make friends on both sides of the field.

Did you experience ‘culture shock’ in Spain? How different is it from your USA?

Of course there were all sorts of culture shock incidents when I first arrived, like being an extremely punctual American. I remember when I first arrived in Barcelona, I was invited to a friend of a friend’s child’s birthday party. They had told me to be there around 1:00, so thinking I was being very polite I arrived just on time. When I got there at 1:00 sharp, I was shocked that not only was I the very first to arrive, that nothing had been prepared yet. I was embarrassed and wanted to come back later but the house was very far from the city center and they “invited” me to help them set up the decorations, cook, prepare and the other guests finally arrived at about 4:00 or 5:00 “after lunch.” I have never arrived on time ever since!!

How has your life as an expat influenced your personal and work life?

Being an EFL professional, I work with Spaniards every single day. I have the pleasure and opportunity to teach them not only English, but American culture too. Every day is a day to do with cross-cultural issues and lessons. I learn from them and they learn from me. A pure intercultural exchange that I value with each class and every student.

6.What have you learned from being an expat? Positive/negative (WHY?)

What has been interesting as an ex-pat is that you leave your country to take a break, to escape the ins and outs of daily life in your original country but really abroad, you are constantly representing your country and being associated with it. In my case, in many situations as the token American, I am frequently being asked questions about life in America, to compare and contrast, so ironically, the place you are trying to disconnect from is the very place that you wear like a crown on your head every day.

Have you done anything since moving to Spain that you never would have expected?

I never expected to raise my child in Spain. I am the mother of a 16 year old and I have had a tough time balancing my American expectations and values with the given ones in Spain. For example, many teenagers in Spain stay out until the wee hours in the morning without a blink of an eye from their parents. It’s very difficult letting go of my more conservative instincts thereby telling my son to be home at 12:00 when all the other kids don’t go back until 3:00, 4:00, 5:00 maybe 6:00 in the morning.

What’s the best food discovery you’ve made as an expat?

Being a major foodie I am absolutely blessed to be living in a country like Spain. To this day, I am simply amazed at the fact that practically each neighborhood has its own fresh food market that is a wonder in terms of quality, price and value. The markets are the heartbeat of the surrounding restaurants. There are so many fusion cuisines that are up and coming and Spain is on the frontier of creation. My very favorite way to eat is a tasting menu whereby a chef designs and prepares little taster plates based on the freshest products of the local markets. We went to a restaurant the other day where there is no written menu, the chef/owner comes out and doesn’t ask anything, in fact, he tells you what there is. Perhaps for some of the courses he will give you option A or B, if you are lucky; otherwise, no say, just obey. I love the fact that I don’t need my glasses to read the menu. It’s a very exciting way to eat!

What was the biggest misconception you had about Spain when you moved there? (good/bad)

I had always imagined that the Spanish were extremely open and friendly warm and hospitable people. However, when I first arrived, I was shocked at how reserved and unwelcoming people were in general. Where I live in Spain, the local government had to actually put out a publicity campaign to remind locals to smile and be friendly to tourists due to the fact that they were bringing lots of income into the local economy. On the other hand, when I go back to the USA, people seem overly friendly at times, and since I am not used to strangers talking to me, I feel a bit taken back at times. I must say that when one is fortunate to be friends with a Spaniard/Catalan it is 100% and usually for life!

What do you miss from USA?

Having said what I did about Americans being over friendly at times, I do miss the simple chatting while waiting in line at the supermarket, the smiles and joking between strangers and the daily “howya doing” -it helps with cheering up one’s day! I miss the fact that shops are opened all hours all day whereas in Spain, shops close lunch time and on Sundays. It’s very limiting on the one hand, but on the other, the fact that practically all businesses are closed on Sundays forces you to relax, take the day off, and head for the beach, a walk in the park, a hike, or just sit on a sunny terrace enjoying the peaceful day.

What’s the best thing and worst thing that has happened to you as an expat? (what really annoys you and what do you really love)

Something that I admire in Spain that I don’t see in the USA is the integration of ages at any given place/ event. For example, if you just look around at an outdoor cafe in the city center, you can see generations of people sitting side by side. Teenagers sitting next to young couples in their twenties sitting next to two mothers with infants, sitting next to a group of middle aged women sitting next to elderly folks. It is harmonious and all ages seem to be respected with no apparent discrimination. Everybody enjoying the sun, the food, the drink—life.

What is best about the area where you live…any other cities you would like to live in??

Barcelona is undoubtedly one of the best cities in the world to live in. We have the sea, the mountains, some of the most interesting and beautiful architecture in the world, incredible design, urban innovation, fabulous restaurants, museums, unstoppable nightlife, zillions of neighborhoods to be explored just to start with..The climate is enviable, very mild in the spring and fall, somewhat chilly in the winter, and slightly hot in the summer-but no extremes, no natural disasters to worry about, unlike in the south of the USA–tornadoes, hurricanes, ice storms, and an out-of-the blue snowstorm.

When people come to visit Barcelona, they see the Gaudi sights, the modernist routes, the gothic quarter, and all of the other major landmarks, but there are layers upon layers of treasures to be found. There is no other city that compares with Barcelona, at least, I can’t think of one.