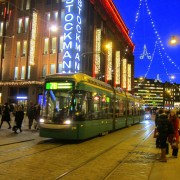 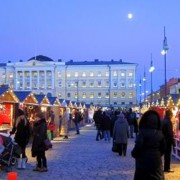 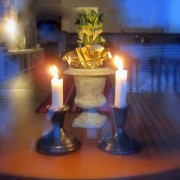 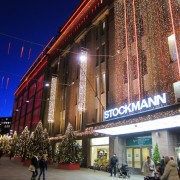 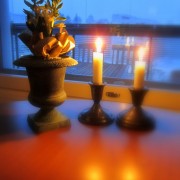 Mom, editor, writer, journalist, Realtor. Heli has lived in London, Dallas, Helsinki and Austin. She recently returned to Helsinki after several years in Austin, TX. She has a MA in comparative literature, and she has been working as an editorial manager in several publishing houses in Helsinki in the past.

In December the Christmas season really gets into full swing around Helsinki. The main shopping street of Helsinki, Aleksanterinkatu, will be decorated by the traditional Christmas lights going back to 1946, and the turning on the lights event is the official opening of the Christmas season in the city. The Christmas window display of Stockmann´s department store is “the thing” to see by children… and adults.

The Independence Day of Finland is the 6th of December. Finns light two candles in each window of their home in the evening to mark this important day. A legend has it that two candles were used as a sign to inform young Finnish men that the house was ready to offer shelter and keep them hidden from the Russians, when they were traveling to Sweden and Germany to become jägers. “A jäger” means elite light infantry, scouts and sharpshooters. Other popular tradition is to enjoy the broadcasting of presidential ball on the night of Dec 6th on the national television.

December is the time for numerous Christmas markets all over Finland, and Helsinki is famous for it´s St. Thomas Market, which takes place at the beautiful Senate Square. With over 120 booths the vendors are selling everything from handicrafts to gingerbread houses, canned food and delicious breads.

The length of the day in Helsinki during mid December is barely 6 hours. Finns are counting the days until the winter solstice on December 21st, when the daylight starts getting longer again. But before that, everyone is waiting the highlight of the year, the Christmas Eve!

All photos by Heli Bergius.