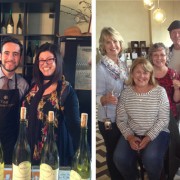 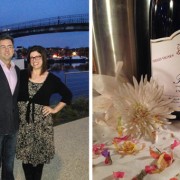 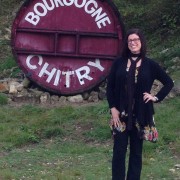 Who is Stephanie Sack and how did you find out about EuroCircle?

Hello EuroCirclers! My name is Stephanie Sack and I am the Communications Manager for my family’s luxury European travel company, the Barge Lady. I heard about EC about a year and half ago on Facebook! I joined the group right away, introduced myself to the Chicago ambassador, Maria Dollas, and have been active ever since.

How did you end up in Chicago? You lived in Europe, right?

I am a native Midwesterner, born and bred Chicagoan. My exposure to international travel and foreign affairs was from a very young age, as I began French lessons at age 8, attended an international youth leadership camp at 15, took my first trip to London at 18, and then off to Paris at 21! I have since been to Madrid, Barcelona, and Amsterdam, with additional trips to London and Paris. I have a very good friend who has lived all over the world, speaks four languages, and obviously possesses a complex view of international affairs. He has always said I am typically Midwestern in that I am grounded and pragmatic, but have a far reaching and global view that belies my upbringing as a lifelong Chicagoan. That is a wonderful compliment!

What is the best and worst about Chicago for you…what is a typical day and weekend?

On more days than not, I adore Chicago! I work out of the Barge Lady offices in the River North area, an area that once was sort of scuzzy thanks to the nightlife “of ill repute”. These days, it is a vibrant business district with a slew of scrappy start-ups, large corporate companies, flagship Chicago restaurants, and chic juice bars. We have a darling office in a vintage office building and are always visiting and collaborating with other colleagues in the area. Weekends I am at my yoga studio taking hot yoga classes, grocery shopping for new recipes, hanging out with my boyfriend, and spending time with my family!

How do you find the lifestyle in Chicago compared to Europe?

The European way of combining the old with the new has always been a fascinating difference. America is still so young, whereas Europe reveres its millenia of history in a way that simply does not translate to any American city. Chicago obviously stands alone in American architecture, but lacks the serene grandeur of European landmarks and cities. It’s hard to describe but I do feel it.

How do you make your living now – and how did you choose that career? Ever done anything else?

I am so blessed in my professional development in that I have always had the coolest jobs for the best people. I sold adverts for an arts and entertainment publication in my twenties, and am still very close with the owners of that company. I then owned and operated Chicago’s original independent boutique for stylish plus size women, offering the latest looks and and trends exclusively in sizes 12-24. It was called “vive la femme”, bien sur! After eleven years, it was time to move on, and I then ran a small marketing agency as for small business throughout Chicago, producing private events, consulting on advertising buys, and managing social media strategy. I was having a blast, meeting a ton of people and working on interesting projects, when my sister, Caroline, offered me a job as the Communications Manager at The Barge Lady in July of 2014. Caroline’s tenure at the Barge Lady began in 2010, and I was hesitant at first to join my mom AND my sister in a professional context. I started part-time in August 2014, took my first barge cruise in October 2014, and went full-time in November 2014! Now I get to use my entire skill set, speak a bit of French, AND see my family every day!

What is the essence of Chicago to you – what do you absolutely want your friends to see or feel in these places?

The neighborhoods are the beating heart of Chicago, and when friends are in from out of town, I take them to the authentically “Chicago” places, well off the beaten path. I had a gal pal in from California over the winter…we had coffee and people-watched at my favorite cafe, met a bunch of awesome folks at a party at one of the local clubs, and attended a meditation service at a super hip spiritual center, all in three different neighborhoods. Those kinds of things are what I like to show people about Chicago.

What do you absolutely miss from Europe…or elsewhere?

I miss a sense of gentility and culture that prevails in Europe. It is definitely in Chicago, you just have to look for it, but Europe’s complex culture, iconic cuisine, public art, and urban planning is something I think about often.

What are you favorite travel destinations for you – outside work?

I LOVE the American West…Nevada and Colorado are always top of mind when I travel domestically.

If you could change one thing from American culture/mannerism – what would you do? Same for Europe (a loaded Question, I know)
LOL this is definitely a tricky issue! Americans are sweet people, and we mean well, but we are SO GAUCHE! Loud, dressed badly, clueless…gah. All harmless but irksome traits. Europeans…perhaps a more generous spirit when a tourist (okay, yes I mean ME) asks for help would be delightful.

Workwise – how do you see Europeans being different from Americans– also culturally, what stands out in your chosen profession?

I think a more entrepreneurial spirit has influenced the European work ethic. It’s been amazing to see the food tourism movement take hold in France, and England revved up the economic engine with the success of the Tate Modern, a slew of new hotels, and a commercial response to the success of Downton Abbey. Travel has always attracted hard workers and detail-oriented people — if you don’t know where your passport is you ain’t going anywhere — and the influx of travel websites, personality-driven blogs, and self-publishing options has added new dimensions no one could have predicted when the Barge Lady began in 1985.

Would you live fulltime in Europe?
I would LOVE a place of my own in…Amsterdam, maybe? Ultimately I would like to have a permanent address in Chicago with a ton of escapades throughout Europe. So we’ll see!

What is a great weekend for you?
Lots of yoga, plenty of cooking, hanging out with my boyfriend, and smooching my adorable two-year old niece!

Your favorite trips by your company and why?

There are SO MANY amazing itineraries! Barge cruises are luxury adventures on your own private floating hotel. France is chock full of awesome barges! We have a “Dine Around” program aboard the “Savoir Vivre” where guests visit small restaurants deep in the French countryside for a taste of Burgundian cuisine, which is a super popular option for foodies. Winsome winos will adore the Bordeaux wine cruise on the “Mirabelle” with daily wine tastings throughout the region’s world-famous vineyards, while those who like more physical activity can bicycle throughout the pristine backroads of France while on the “Papilion”. In Scotland, guests can golf on elite courses during the day and sip small batch Scotch at night, while in Holland passengers immerse in the glorious assault on the sense that is Tulip Time. Beauty, culture, and gastronomy abound freely on barge cruises!

Your own dream trip – where and how would you like to travel?

I am planning a trip to Scotland to visit a barge called the Scotland Highlander, hopefully in late 2015 or early 2016. A stop in Edinburgh seems prudent, and I love to take trains in Europe, so a train ride (or three) will be involved! I also REALLY want to visit Iceland and Denmark, so with any luck some time in Reykjavik and Copenhagen are also on the docket! Finally, I plan to attend the Burning Man Festival this year in Nevada. This will be my fifth visit to this otherworldly event!

What makes Stephanie happy….if I had the power to give you anything you want to make your life perfect for you, what would you like me to do?
May I have an emerald green vintage Jaguar, please! Oh, and a driver to go with it!

\I look forward to sharing the barging lifestyle with the good people of EuroCircle!

Larisa Pevtsova, From Russia to Chicago, Larisa’s Life through the Le...