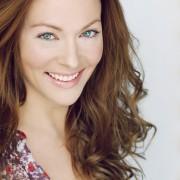 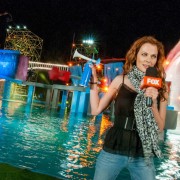 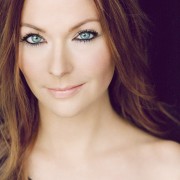 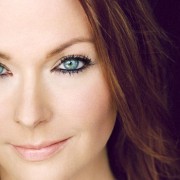 I asked Anna Easteden to answer a few questions as she is such a cool woman – and pretty! Well, judge yourself. At the end of the interview you find a couple of more links to her videos.

Who Is Anna Easteden – and what does Anna do/where?

I started out as a model, I continued as an actress and now am also a TV -host for Wipeout Finland. I live in Los Angeles and love to travel. I have worked with the United Nations Human Commissioner for Refugees in Bratislava, Slovakia, which I am very proud of.

At what age did you know that you wanted to be an actor ? Keeping in mind that you used to model for years, right?

I started out as a model at the age of 12. Then I sort of drifted to becoming an actor. As a model I did some TV -commercials and music videos and then before I knew it I was doing theatre and then took some acting classes in Chicago and in Los Angeles. So, it was sort of a path that took about 10 years without really having a defining moment of when it is that I became an actor, but now I do consider myself more of an actor than a model.

What has been the most exciting “thing” or role that you’ve covered during your career or should we say careers?

The most exciting thing for me is traveling and exploring different places. I have been very lucky to work in many, many different countries. Getting to shoot anything in Guam, Hong Kong, Singapore, Tokyo etc. is a dream come true for me. I really live for adventure, and any role that brings me adventure is very exciting. I got to spend a month in Argentina this year shooting “Wipeout Finland” and once again I fell in love with a new place. I love that.

I am very proud of many things. One of them is just the fact that I was born on a farm in the middle of nowhere not speaking English and by the time I was a teenager, I was living across the globe in Asia speaking other languages, and making way more money than my $5/week allowance at home on the farm was! I also have been nominated for an acting award as well and have won some modeling competitions, but usually I end up being the proudest of the most recent “cool” job I have done. And it is my dream to achieve something even bigger and better in the future as well to blow all my achievements up until now out of the water. LOL. 🙂

What would you say is the biggest misconception that people have about your profession (acting) or modeling?

Some people think it’s easy. And to some degree it is easy. There have done some very easy jobs that I have loved. But the competition is absolutely crazy, and it’s not necessarily always easy booking the jobs. Many actors are the hardest working people I know. We don’t get paid to audition or to rehearse most times. So, you got to love it to keep dedicated, as the days you’ll actually get paid are few and far between.

The worst thing about being an actor is the downtime between jobs. The times when you’re worried about the next job coming. You end up having lot of time to think and that’s not always good! I like to keep myself busy at home with projects around my house. I have kept remodeling my 1926 home for three years now. My vegetable garden always has something new growing in it. And I dedicate some time to homeless cats too. 🙂 I enjoy the actual work of being an actor most. I enjoy a job well done and knowing that I gave a performance that the director and producers liked. I also love it when I am so much a character that I forget that I am me!

What have you found to be the biggest difference between acting in Finland and Los Angeles? Just out of curiosity loved to hear something about your Japan experiences too.

I thought there would be a big difference between Finland and LA when it comes to film making. I went to Finland to shoot a film with director Mika Kaurismaki and I was very surprised how similar everything is between the two places. I honestly don’t find that much difference in working in the two countries. The lovely thing about Finland is that the directors call “Please” and “Thank You” instead of “Action” and “Cut”. Japan in itself is a whole different experience. If you have seen the Sofia Coppola -directed movie “Lost in Translation” where Bill Murray’s character does a commercial in Tokyo – working there is EXACTLY like that. I laughed so hard watching that movie because I could relate to everything!

What kind of people survive and do well in this field of work (acting vs. modeling) in your opinion?

I think the survivors are those actors and models who are determined, don’t give up, and don’t have a back up plan or a second love of some other field.

Are there any roles that you would hate to play?(good/bad)

I honestly don’t think so. I enjoy being other people and seeing life from someone else’s view point. “Bad people” are sometimes the most interesting to play, because there aren’t many chances in real life to be really mean or evil without feeling bad about it later.

What advice would you give to other aspiring European actors aiming for the stars in Hollywood? Or models…

Go for it! If you want to come to Hollywood, come on over. You might regret it later if you don’t give it a try.

So many of them are super talented, very captivating and lovable. I love Johnny Depp, Meryl Streep, Marilyn Monroe, Jack Nicholson etc. I’d get absolutely star struck working with them. Both their on-screen and real life personas are fascinating.

Since you are Finnish – must ask what do you miss most from Finland – think you ever return to live back there? And how is the Finnish community in Los Angeles…

I think I miss the usual stuff most Finnish people miss: sauna, salmiakki (salted Licorice) -candy, rye bread and clean air. I have fixed some of this though: I built a Finnish sauna inside my house, and I found an awesome alternative rye bread from my local Whole Foods. I meet up with a lot of the Finnish community at the Finnish Consulate events. I love those. Otherwise, I don’t meet with that many Finnish people on regular basis.

What do you see the best about the Finnish culture/people?

I find Finnish people very reliable and trustworthy. That’s a very good trait to have! Finland as a country is very clean and pure. I love clean air and water. Very basic things in life, but unfortunately those are not a given in the rest of the world.