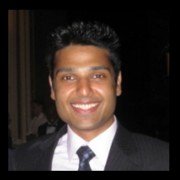 When I learned about Madhav, I really wanted to interview him. For one, he is a young immigrant entrepreneur in Manhattan – and he studied @ Columbia University where my boyfriend did his MBA as well. For me personally anyone who has technology related start-ups is interesting. He has some interesting ideas such as Open Ideas Initiative (adapted from the Open Source Initiative). In sum, when you post an idea on that site, the idea no longer belongs to you — it becomes the community’s.

Madhav Krishna, you are originally from India? You moved to New York City a few years back. Why did you move to the USA instead of moving for example to the UK?

I am originally from Delhi, India. I moved to New York in 2007 to study at Columbia University where I pursued a Masters in Computer Science. I chose this country over others mainly for three reasons. First, America is renowned for its higher-education system; there is heavy emphasis on the applications of what is learned in the classroom (over plain theoretical knowledge). Second, she is known for being the world-leader in terms of technological innovation and entrepreneurship – I attribute that largely to the fact that American society is a lot more tolerant of failure than others. Third, I have some family settled here that provides me with a great support system.

What do you enjoy most about New York City, now when you have more experience, how’s the quality of life compared to India and your home town? I know it is hard to compare but it is interesting to see what stands out for you even study/work/living/food etc. I would think studying is very different here than in India, I know it is different compared to Finland.

Whenever people ask me that I question I tell them that I have a love-hate relationship with New York. When I’m in the city I’m running around a lot, constantly trying to get things done, and waiting for the next opportunity to take a break. However, when I leave the city for a vacation, I cannot wait to get back. There is something about the fast pace of life here that grows on you; New York forces you to become an overachiever – helping you learn how to juggle a variety of tasks/projects more efficiently.

As for the quality of life as compared to India, it is better in certain ways and worse in others. For instance, it is much easier to get around New York via public transport, the infrastructure is very well developed, there are amazing restaurants and bars to visit, and great shows to watch. However, living here is very expensive. You pay way too much money for a small living space, and you pay a premium for fresh food. In India, on the other hand, it is very difficult to get around and you waste a lot of time on things that we take for granted here. For instance, even paying a telephone bill can turn into a time-consuming ordeal. Further, any task that involves dealing with a governmental organization is almost impossible to complete without jumping through a thousand hoops – manifestations of red tape and systemic corruption. However, there is a lot more value for money in India and you can afford a very nice house and eat delicious, freshly cooked food for every meal.

Usually there are some negatives, what are the ones for New York City that really stand out for you personally? What do you miss most about home?

The biggest negative about living in New York is that it is very expensive.

I miss my family and the food from back home the most.

Do you feel New York City is a good place for expats as an entrepreneur right now? Are there any areas expats like you might like better in the USA in your opinion (entrepreneurs)? WHY?

New York is an excellent place for entrepreneurs, in general, right now. Not so much for expat entrepreneurs though because, given the current state of immigration laws, being self-employed in America as an immigrant is incredibly difficult – especially if you come from countries like India and China. However, the New York tech startup space has seen a tremendous amount of growth over the last 5 years and is now the second largest tech hub in the US after Silicon Valley. That said, the startup ecosystem in Silicon Valley still is miles ahead of that in New York; everyone eats, breathes and sleeps startups there.

I am curious have you noticed whether the expat entrepreneurs seek to work together in NYC – and share offices – and favor certain buildings/areas? If so, why?

I haven’t noticed this phenomenon in the tech entrepreneurship scene in NYC. In fact, there is a tremendous amount of mixing – most tech startups in the city are very multicultural – talent is valued over ethnicity.

“Strategic disengagement” definitely is a key part of being a successful entrepreneur. You have to be able to recharge your batteries from time-to-time if you want to be able to perform consistently well. I generally go out with friends for dinner or drinks once or twice a week and in addition, I try to meditate and exercise regularly. Plus, I play the guitar. In the end, leading a happy and fulfilling life really is about balance.

What’s the economic climate like in New York City for start-ups, how would you compare it to India? Why?

New York is definitely a better place to start a company than India – for social and economic reasons. Given a reasonable idea/product, raising money in New York is relatively easier – the appetite for risk is a lot higher. Also, the startup community in New York is small enough so that one is able to make connections with important people fairly easily – most people (VCs or otherwise) are 2 to 3 degrees of separation away for someone who has a decent network.

India, as a society, is very conformist. It is difficult to start a company there because of fear of being chastised on failure; appetite for risk is very low. Plus, the economic climate in India is not very healthy at the moment. The economy only grew by around 5% last year and inflation was as high as 11%. Interest rates are also very high (9-10%).

Indian work culture is very different – of course people tend to act and dress differently but at a higher level, there isn’t a lot of professionalism and most people view their jobs as just jobs – not core parts of their lives. The concept of “owning” what you work on is largely alien to Indian work culture. It is also a very patriarchal society and hence, women, in general, are discouraged to join the professional workforce and are forced into lower paying jobs; most end up being stay-at-home moms.

Great question. When I came to New York, I expected it to be picture perfect – clean, where everyone was rich. I was surprised to see dirt and pollution here – and even the egregious poverty.

Until a few years ago I think most Americans thought of India as the land of snake charmers. More recently, as the popularity of Indian film, dance and food has increased in the States, and as Indian expats have stepped into leadership roles at some of the largest American corporations (Pepsi, MasterCard, Goldman Sachs etc.), people’s perceptions have begun to break out of stereotypes, and an appreciation for Indian culture has developed (at least in big cities).

Do you think your career (business) would be the same in India – or does this work better for you? Either way, please explain more.

I don’t think I would have had the opportunity to break out of the “conformist mode” had I decided to stay in India. I would not have been able to discover my passion, and follow it.

What are your favorite restaurants/bars in New York (WHY) – and socially/workwise – what kind of networks do you attend to connect with people for business/personal life?

Amongst restaurants, I like Uva (Italian), Numero 28 (Italian), Bukhara Grill (Indian), Doaba Deli (Indian), and amongst bars I like Mulberry Project and Rye House. These are my favorite primarily because they serve delicious food/drinks – everything else is secondary.

I used to be very active in the meetup scene in New York a couple of years ago. I attended the New York Tech Meetup and the New York Entrepreneurs Business Network regularly. These days, I run my own meetup – it’s called the New York Tech Networking Roundtable. We have kept it small on purpose – only 20 people are allowed to attend per event – in order to keep the event more intimate. This helps people identify potentially valuable connections easily and thus, the processing of networking is made more efficient.

What would you like to everyone to know and understand about India, its people and culture??

I think the one thing that I would like people to be more aware of is that India is incredibly diverse. The country has witnessed many waves of immigration over the last 5000 years; over the centuries, the Indian way-of-life has assimilated a multitude of incoming cultural influences. We are now a nation of 1.4 billion people with over 2000 different ethnic groups, 10 major religions, and 33 major languages.

We know you have a specific interest in immigration issues. After all, the USA is considered “the American Dream” where everyone has a chance. Please tell us your thoughts and how people can get more information – or get more involved in helping you reach your goals.

It sounds clichéd but the “American Dream” is a real phenomenon. American society is a strong meritocracy – almost everyone is rewarded for their hard work in this country. Further, if not for themselves, many immigrants have come here and created more prosperous lives for their progeny. Unfortunately, with the current state of immigration reform laws, it is very difficult immigrants, even as legal taxpayers, to gain legal resident status in the country.

From my perspective, as an immigrant who tried to start a company in the past, I quickly found out that it was next to impossible to do so; immigrants are not allowed to be self-employed in the country. There are ways to work around this stipulation but doing so, especially for Indians, costs a lot of time and money. I now work with another startup and pursue my own work after-hours. This is the status quo, despite the fact that many successful American companies were started by immigrants (Google, AT&T, eBay, Yahoo etc.) and created thousands of jobs in the country. In fact, around 40% of Fortune 500 companies were founded by immigrants or their children.

One of the best ways to get more information on immigration, and to get involved, is to join FWD.us. It is an organization started by leaders in the tech community to help move the knowledge economy forward – immigration reform would be a huge step in that direction. FWD develops great content to help educate people about immigration, and also makes it easy for people to take action. If you go to this page and enter your email address and phone number, the FWD.us system will connect you to a Congressperson in your area – you can then express your support for immigration reform. Even though 80% of Americans support reform, the 20% who don’t are a lot louder than the majority and hence, are able to influence our leaders more. It is important for everyone who supports reform to let their leaders know – connecting with them through FWD is one of the best ways to do that.

Katja Moved from Finland via Holland and...
Scroll to top