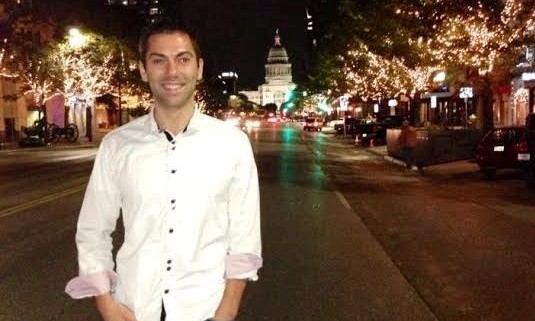 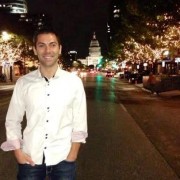 I was so happy when Paul agreed at my request to answer some questions – and the funniest thing I recall thinking reading his answers that “ok, I like coffee houses too and miss Finnish/European cake culture”. I have not met that many Romanians in Austin but in NYC we had a very strong Romanian community. In fact EuroCircle even had events together with the previous Romanian Consul General Pavoni years ago.

1. Please introduce yourself. Tell us a little about where you are from originally and who you are work etc.

On name – my name is Pavel (though I go by Paul) Emanuel Volosen.

On country – I was born in Romania, and made it to the US not so much by my own volition, but by the decision of my parents to boostrap 4 kids in a Dacia off-roading full speed (about 35MPH) towards the border of Hungary all the meanwhile border guards were in the chase. Having successfully crossed the fence to Hungary without any casualties, my parents decided to make a run for Austria within a couple of months. Although it took two attempts (first failed – we got lost, no ‘google maps’ available at that time), my parents successfully transported the family into Austria in relatively in one piece with the help of friendly smugglers with better maps, and in exchange of many ounces of gold and other jewelry. As amazing as this might sound, this is the story relayed to me by my parents, and I’m skipping the details. The irony is that the Berlin wall fell after we make it to Austria, and the borders opened up. Timing is everything.

Shortly thereafter, it was smooth sailing through the Austrian political asylum process and we landed in Ellis Island, New York. We were in America – the land of opportunity, freedom, and hope. Despite it seeming quite adventurous – and risky, to say the least – now, mostly what I remember is running, the weather being cold, and wet. I dislike cold, and wet. I can accept running.

Following stop was the beautiful country of Texas, settling in Dallas for a few of my early elementary school years. By the 3rd grade, I had lived and attended school in four different countries – Romania, Hungary, Austria, and the US – and by consequence had to learn and re-learn reading, writing, and communicating with the other kids in school with each new hop. This experience “paid off,” as by the 5th grade I won the school spelling bee contest. Regrettably, with the advent of the “F7” feature in Microsoft Word, and “the google,” my spelling abilities have returned to my pre-5th grade levels. Although I can recognize when Hungarian and German is spoken.. I’d have to break several Rosetta Stone DVD sets before picking it back up. A long trip to Europe is overdue for sure.

The following 20+ years I resided in Seattle, WA, where I attend University of Washington and studied Computer Science, worked for over 10 years at Microsoft, and finally decided that I will not succumbed to death by Vitamin D starvation by setting my gaze towards Austin, TX.

On work – I work for one of the coolest software startups in Austin, Sailpoint Technologies as a Software Support Engineer. No, not Salesforce. Sailpoints develops ‘Enterprise Identity Management’ software, basically manages your identity (think ‘logon’s in simple terms) in a large organization.

2. How did you choose your career?

On career – I was influenced in working in software consequence of the overcast shadowed by Microsoft, and the allure of making it as a millionaire at Microsoft. Then I started working and realized that I wasn’t going to be a millionaire, but that I could work on pretty cool software problems, and help make software products better. Over my career, I’ve worked in different roles ranging from test engineering, program management, technical account management, and software support, and I most enjoy roles that have a healthy customer facing component, and require a solid base of technical skills. I also have an entrepreneurship spirit, having contributed to early software startups, and having owned managed real estate property in Seattle.

3. What did your family do and where are they now?

In Romania, my parents worked as engineers for the city. Currently, my father is retired, and my mom works for the city of San Antonio.
I also have 5 siblings: 4 in Seattle, and 1 in San Antonio. Of the siblings, my older sister is in Seattle married, my two younger brothers are in Seattle and work in the government and services industry respectively, and my 2 younger sisters who are kick ass. The youngest is starting medical school at UTSA Health Science center this year, and second youngest just graduated from UW, got married, and is about to start a full time job with the Macy’s Executive Business Development Program.

4. Do you try to go back to Romania every year? The language and the culture are different than in TX for sure. What do you miss the most – and the least?

Every year I say I will, but I have not been successful, yet. When I do end up going back, I think I’d enjoy (and by virtue ‘miss’ if I had visited) the countryside which I hear is very beautiful. Romania also has a rich folklore heritage and I’m sure I’d enjoy and probably miss that.

5. When you think about life in Romania vs USA before you moved to the USA – did you have misconceptions that turned out to be wrong?

Yeah, that America, and everything that it had to offer – opportunity, hope, freedom – wasn’t just an illusion, it was real. Until I arrived, the US might as well have been Neverland– a place my parents talked about where they could say whatever they wanted without the fear of reprisal, but I would probably never visit.

6. What is your favorite food/s and drink??

I like Romanian cakes – no cakes tastes better. No cakes gets more love. No cakes sweeter. ON the American side, I like tiramisu, and cheesecake. Yes, I like cake.
Drink wise, I’m a modest drinker, but when I do, I tend to stick to Vodka; it’s my Russian / Ukrainian blood (as my grandfather is Ukrainian). Close second is red wine, then champagne, and DX is good.

7. Which restaurants and bars you like the most in Austin – and why?

There are a lot of good restaurants, and unbelievable number of bars. Sway makes the best Thai in town, and I enjoy Thai food, so I’ll go with Sway for now. I like Molotov because it’s usually not too crowded compared to some of the other bars.
I also do tend to frequent coffee shops, with Stinson’s on 45th being one of my favorite at the moment.

8. How is the Romanian community in Austin vs. USA? Who do you think are the Romanians the average American may know?

On Romanian community – So far, regrettably, I have not found a strong Romanian community in Austin. I’m a little bit perplexed as there is a Romanian community in every other major city. However, I also started a group on Facebook for any Romanians that may be interested in joining.
On Americans knowing Romanians – The foremost ‘Romanian’ that Americans might know is Dracula, or at least the individual that that spawned the myth, Vlad Tepes. Second to that is Nadia Comanecia – the Romanian gymnast who made the first female to receive a perfect score in an Olympic gymnastics event.

9. What would you like anyone know and appreciate about Romania? (food, music, culture, people, history….)

10. Would you ever return to live there fulltime?

I don’t have plans to move there any time soon, but if I ever felt very nationalistic (like Romanians, and ex-pats sometimes do..), I could see myself going back and attempting to live like a king.

11. Could you share with us what are your plans for the future ?

Get married, have kids, and retire here. I kid, I haven’t crossed the right roads to make new critical decision yet. My plans at the moment are to continue to live life to the fullest, enjoy the sun, get to know good people, continue to work for a great company, rinse repeat, pass go, and collect $200.

12. Btw, if you watch world cup – who do you think is going to win – the results so far have been rather surprising?

I’m rooting for USA! The American Revolution was won against the British, Communism fell, USA hockey team won against the Soviet Union, Seattle Seahawks won the Super Bowl (LOB! LOB! M.O.B!), and many other “it will never happen” events in history did in fact occur… USA can win. We made it out of the so – called ‘Group of Death’, let’s bring the trophy home!