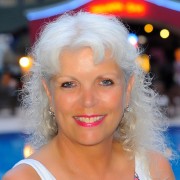 We have a European visitor in Austin this week. It’s Runa Bergmann, who is here to promote her destination management company and offer Austinites a Taste of Iceland at restaurant Chez Zee on Balcones. She is accompanied by chef Bjarni Bequette who will be serving Icelandic lamb, desserts made from the renowned skyr, a dairy product dating back to Viking times, licorice and Brennivin, an Icelandic aquavit from Thursday February 26th to Saturday the 28th.

***Stop by Chez Zee during the promotion days, Feb 26-28 and enter a drawing for a $500 gift card
from Icelandair towards an airfare and a 5 nights stay at Grand Hotel Reykjavik.

How long have you been in the travel industry?

“I’ve been in the event management and travel industry for 25 years now,” says Runa. “I ran my own hotel and tour operation for several years and have been a tour escort for groups both in Iceland and other countries. I love my country and have been travelling around Iceland since I was a little girl, hiking, skiing, hunting and salmon fishing, so I’m familiar with every part of the products I’m offering through my business.”

I currently live in the Vinings suburb of Atlanta GA and have been in Atlanta since 2007.

Tailor made trips to Iceland

“ICELAND TRIPS 4 YOU specializes in tailor made tours for people who want to visit Iceland, whether the group consists of 2 or 20 persons. In addition, we plan conferences and incentive trips. The company is built on years of experience, as the owners have all been in the industry for 20 years or more. My partners are the owners of the Fosshotel and Iceland Hotel Chains, the second largest chain in Iceland.”

Why promote Iceland in Austin?

“Sharon Watkins, the owner of Chez Zee, is a dear friend of mine. We became friends at my hotel in Iceland and she has repeatedly been back to escape the hottest months in Texas. She loves the country and the food and has always wanted to have special themed Icelandic days at her restaurant, so when I opened my travel agency, it just seemed right to go ahead with her idea. I was lucky enough to get Bjarni R. Bequette, the Executive Chef of the Fosshotel Chain, to travel with me. He will be serving up a special Taste of Iceland dinner menu at Chez Zee on Feb 26-28, as previously mentioned. We brought real Icelandic food items with us, including Icelandic lamb, “geyser” rye bread, licorice, “skyr” the special Icelandic dairy product, and Brennivin, an Icelandic aquavit. The guests who visit Chez Zee are in for a special treat.”

See more about the menu and ingredients below:
www.chez-zee.com/dinner-specials-taste-of-iceland-feb-26-28-2015/

What are the 10 things you’d like everyone to see in Iceland and why?

It’s hard to choose, because Iceland has so many beautiful and magnificent places to visit, but my list would look something like this:

1. Thingvellir, which is where the first parliamentary rule in the world was established in 930 A.D. It is a sacred place, the landscape is magnificent, and it sits on one of the few visible rift valleys on Earth.

2. Geysir, the geothermal area, which all “geyser” areas are named after. Strokkur, one of the geyser’s, erupts every 3-5 minutes.

3. Gullfoss, the golden waterfall, which demonstrates the force of water which has carved its way through the land forming deep gorges.

4. Snaefellsjokull Glacier and the surrounding National Park in West Iceland. French author Jules Verne used the Glacier as an entrance to inner earth in his novel Journey to the Centre of the Earth.

5. Latrabjarg cliffs, the westernmost point of Europe, where puffins and other seabirds nest.

6. Lake Myvatn in the north east part of Iceland. Psuedo volcanic craters as well as real ones, and lava formations create magical landscape. The birdlife on the lake is unique.

7. Jokulsarlon Glacial Lagoon, where icebergs from calving glaciers fall into a lagoon, and float around the boats that take tourists around it.

8. Dyrholaey headland on the south coast of Iceland. Spectacular landscape created by erosion, where many seabirds nest during early summer.

10. And of course Reykjavik, the capital of Iceland which is by the sea, with views to the mountains that mean so much to us Icelanders.

What would be YOUR favorite trip in Iceland?

“My list of 10 describes many of my favorite places, but it only lists a small part of the magic that can be experienced in Iceland. The country is rugged and beautiful. It has glaciers and volcanos side by side. I have travelled the globe, been to all continents, and yet I am always in awe of the magic of Iceland. That is why I am in this business; to introduce the magic to the rest of the world.”

How to connect with Runa Bergmann: