Elena Chestnykh was born in Novosibirsk, Russia and currently lives in New York. She has been an exhibiting artist for twenty years.

Elena’s work has been shown in numerous venues including the Museum of Contemporary Art Erartain both Saint-Petersburg and New York, The Art Center WINZAVOD in Moscow,the State Museumsof Novosibirsk, Tomsk, and Kemerovo, Russia and Nord Art 2010 in Rendsburg Germany. The Novosibirsk State Museum of Fine Art and Kemerovo Regional State Art Museum currently have her works in their collections.

In the early period of her career she traveled around the world painting and learning different cultures. She painted in Italy, Syria, India and Indonesia among other countries. In 2013 the Museum of Contemporary Arts Erarta organized her solo exhibition ‘Urban Reflection’ in New York. In 2015-2016 she attended the MFA program at the New York School of Visual Arts. In 2015 she contributed to the International Conference ‘Art in Modern Education’in Novosibirsk, Russia. Since 2016, she has written a blog about American art in English and Russian and in 2016 she curated a group exhibition ‘Breach’ at the Rabbit Hole Gallery in Brooklyn.

Does the topic about urban life relate to your art practice?

It is an interesting question because this exact theme is what led me to New York. In Russia, I was a full time exhibited painter selling my art through galleries. After about 10 years I achieved everything that I could achieve there as an artist. I got recognition in the art community and was exhibited in all the most important art museums and venues but ultimately, I started getting bored. I got bored with myself and people and with my city. It was a very unpleasant feeling. I didn’t however think about relocation at that time but decided that I needed to look at my city in a new way. I began to paint the streets where I walked every day, but differently. I created my own city.

Slowly I got plunged into the theme of urban life. Then I did another project which was documental and research oriented. It included photo installation, video panorama and a sound-track. For this installation, I took photos of Novosibirsk’s residents in their homes. I interviewed them about how they felt in our city and recorded those conversations. I mixed these conversations with street sounds and music and created a video panorama of the city. It was an atmospheric show. 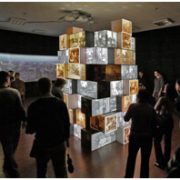 That painting series and this project ‘City Meeting Place’ were noticed by the Museum of Contemporary Art Erarta and they invited me with the solo exhibition “Urban Reflections” in New York in 2013.

I came here for my exhibition and I was charmed by the energy of the city and diversity of people. I decided to get my master degree in New York. In 2015-2016, I studied the MFA Fine Arts program at School of Visual Arts, and finally, I remained in New York for longer. 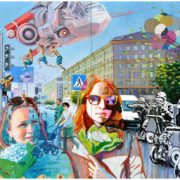 What is best about New York for you?

New York is a multicultural and international city and this is what I like most about it. A lot of ambitious and talented people come here to make their dreams come true. I enjoy just walking on noisy, crowded streets absorbing the energy of this city. There are numerous great galleries and museums, and at the same time the climate is mostly warm and sunny and the ocean is near.

What is the essence of New York to you – what do you absolutely want your friends to see or feel in it vs. your country?

Diversity. New York is Babylon. It is exciting how people of different nationalities and cultures live here together. They intersect interactfriendly with one anotherin a common space and at the same time they keep their own identities and traditions.

You can travel around the world not leaving New York; just go from one neighborhood to another. My first location was Elmhurst in Queens and I felt like I live somewhere in China. Also, at that time I rented a studio in Greenpoint in Brooklyn. It is Polish neighborhood with Polish food and atmosphere. It was a hot summer and sometimes I took a break afternoon and went to the Kosciuszcko swim pool which was just two stops away by subway. Often I was the only a white person there.  It is an Afro-American area.  Next year I spent a lot of time in Manhattan. My studio was on 21st Street at the School of Visual Arts. When I needed an extra tube of paint I went to the art store across the street in my artistic colorful outfit.  Everywhere I felt comfortable as I were at home.  Now I live in Glen Cove on Long Island and have a studio in Bed-Stuy which is Jewish-Hasidic neighborhood.

New York is a tolerant place of different cultures, genders, religions and artists. I enjoy contrast and diversity.

How do you find the lifestyle in New York compared to your hometown ?

I remember when I first came to New York I saw an advertisement from a real estate agency in the subway. It said: “Sure, your bed doesn’t fit your bedroom and your window faces a brick wall, but behind that wall is New York”. And this is how it is for me. Everything is overpriced, but it is New York.

Studying at the New York School of Visual Arts was a great experience for me. It pushed me to grow as an artist and gave me anunderstanding about the New York art community.

I also like the variety of New York food. You can find here every national cuisine. When I first moved here I lived between a Chinese and Spanish areas in Queens and I found a lot of delicious exotic fruits which I never tasted before andat the same time a Russian supermarket was nearby.

My home city Novosibirsk is third largest city in Russia, and the biggest northern city in the world, in Siberia, with 2,000,000 people of the population. It is a big cultural and financial center. The Metro system is much better compare with New York’s subway system.  The Subways are clean and modern and beautiful.  It is like a real palace underground. Novosibirsk also has a well-known jazz festival and famous Theater of Opera and Ballet. Also, there are several great restaurants with author‘s cuisines and interiors like New York.

Do you see the differences between nationalities easily – Russians vs. Americans?

It takes time to get familiar with the nuances of another culture. I started noticing them slowly between words and actions. Also,I have begun to understand better my native Russian culture and how it is seen from another’s perspective. I was told many times that Russian people are too serious and sometimes even tough. I never noticed this before and then I pondered and thought this harshness may have come from a long history of suffering, the orthodox Christianity and the Soviet Union period which was full of fears. Also during the 20th century all generations of Russians experienced big upheavals and losses:either during the Revolution, or Second World War, or “perestroika”, the time when Soviet Union fell. It made Russians expect that something bad was going to happen to them at any time. This is why they are not relaxed and smiling.

I have also heard opinions that Russians are well educated and I am proud of this. This also came from the Soviet Union period, when education was free and government politics encouraged citizens to study. Unfortunately, it is not like that anymore.

What is your typical day?

Most of my time I spend in my studio. Every morning I commute from Glen Cove to Brooklyn by the Long Island Rail Road. I do a lot of work on the train writing, reading and answering emails. Then I go to the gym and then my studio. In the evenings, I often go to different art events. Recently I began to teach at a private art school in Brooklyn. Now in the summer, I try to find time to go to the beach which is only 15 minutes by bike from my home.

How would you like to develop your art career in New York?

Relocation in a new country is a challenging experience and it has influenced my art in a positive way. It makes me look deeper. I learned a lot about life and people. Now I better understand myself and what I am painting about. My current artistic interest is in the existential human experience related to a personal crisis and a search for identity. I use corporal and sexual images in order to reveal unconscious feelings and impulses. Nakedness represents vulnerability and the fragility of a human being. 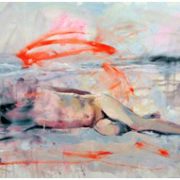 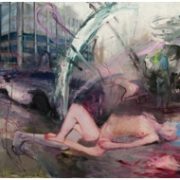 Regarding my art career in New York I continue doing the same thing that I did in Russia,producing and exposing my art work.I also write my blog about Russian and American artists. In 2014,I made a series of interviews for the museum ERARTA about American art education. Then I continued interviewing New York artists for my blog. I found this idea mutually beneficial. While promoting other artists I get useful information, suggestions and inspiration.

Last summer I curated a group exhibition “Breach”. It was an exciting experience. Working in my studio, I look into myself and create my own picture of the world. Curating is creating a dialog with other artists, the art community and viewers. I have an idea for another curatorial project and I hope to have a chance to realize it soon. 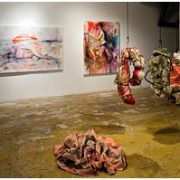 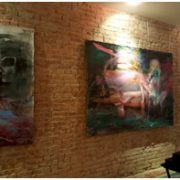 What do you absolutely miss from your country?

I miss the people, my parents, friends and the art community that I belonged to. It is important for me to be in touch and to keep my relationships. During the last three years that I lived in New York, I participated in several group exhibitions in Russia, currently I have a solo exhibition in Novosibirsk, Russia my home city. Also, I give lectures online and participate in an international conference there. Curating the group exhibition in New York I invited both Russian and American artists.

Would you move back to Russia full time?

I don’t consider that I moved to New York and closed the door from Russia. In the contemporary world, we don’t need to decide between counties, we can be global and live all over the world. I want to organize my life in that way which will allow me to live and present my artwork in both counties. Connections and projects in the USA and in Russia feed and contribute to each other.

I would love to have a big-big studio in Manhattan and paint large scale paintings and not to be limited by either time or money. I always don’t have enough time to do everything I want to do. I would like to experiment with sculpture and video, and have more time for writing and curating and reading, and traveling of course! I would love to travel for several months around Latin America and do art project about it.

HOW DO WE CONNECT WITH ELENA