An Estonian-born multimedia design, production & marketing expert Valev Laube has started this year with a series of new projects and initiatives uniting professionals from across the world. From Broadway entertainment to start-up technologies, there’s little left uncovered.

Valev Laube is an Estonian-born multimedia producer & public relations executive based in New York City with a passion for uniting professionals from across the globe throughout many of his current productions as well as branding projects. He’s an enthusiastic, creative mind whose digital designs have been the cornerstone of many event productions, company brands, advertising campaigns, and personal brands worldwide, which probably explains the recent media attention and coverage of his latest project – Kalevala the Musical, an upcoming Broadway musical based on the national epic of Finland. With a background in music, design, marketing, and technology, Laube has become a high-demanded professional in New York City for many upcoming companies, high-profile personalities, and creative productions.

Laube, born in Estonia, but educated in Italy and the United States, started as a graphic designer and worked years as an agency designer for large corporate and luxury designer brands. Little did he know that in just a few years he would transition to working on a full-time freelance basis providing brand building, consulting, and production services to multiple upcoming Broadway productions, and helping already well-established composers, actors, and producers across New York City elevate their brand presence in the age of web 2.0, and social media. As a big believer in the importance of personal branding Laube gets involved in every aspect of a project. He emphasizes the importance of holistic design which weaves together graphics and web design with computer science, public relations, and marketing. “It is important to realize that each professional has their self-interest, but while working with clients, it is necessary sometimes to put aside personal preferences and rather look at what works for them, their audience and how design can accelerate relations that brands build with their audiences,” described Laube his approach.

Laube moved to the United States in 2014 to pursue his studies at the University of Rochester, while simultaneously gaining further experience as a freelance designer, and creative design manager at Sacatelle, LLC. Throughout years he managed to have an input in multiple projects for big companies such as Kenneth Cole, Steve Madden, Janet Gordon Style, among many others. Currently, his impressive list of clients includes a pianist and musical director of “Spamilton” FRED BARTON, two upcoming musical productions KALEVALA THE MUSICAL & SINGING REVOLUTION: THE MUSICAL, actress-singer KRISTI ROOSMAA, actress-producer JOLIE CURTSINGER, INPROXIMITY THEATRE COMPANY, MARQUEE BRAND BUILDERS, ALMAZAN LAW, and many others. “Projects can vary, but it is always exciting to dive into a new industry, both artistically as well as professionally. It’s fascinating to learn about the different approaches that industries take in design and marketing, and then figure out how my personal experience can help companies shift their brand position to becoming a leader in their field,” commented Laube. 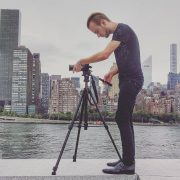 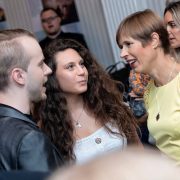 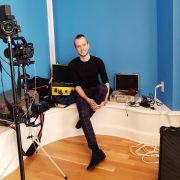 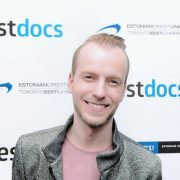 His music recent involvement in the production of Kalevala the Musical wasn’t an accident since Laube has a background in music and even co-produced a multidisciplinary concert at the National Gallery of Art in 2017. “I feel like it was simply a natural move for me to transition into something that merges my biggest passions – music, design, and marketing. Web design and online brand building was something that came later but now plays an equally important role in my work since more and more people find their first brand exposure to take place online, ” said Laube.

Finally, while researching this young professional’s background, it is hard to overstate the diversity of his experience and the collaborations he has formed across New York City, United States, and the whole western world. From an American-Finnish-Estonian Broadway musical production team to German-American tech company, to an Israeli-American pharmaceuticals client. So, I was wondering what’s next in his life, and if there is anything exciting that EuroCircle members should keep in mind. “I think these collaborations simply happened because of project requirements. To deliver the most authentic version of a Finnish story one needs to find a Finnish storyteller, and when delivered to an American audience one needs to find a professional who knows the industry and this particular audience in great depth. In the future I would love to hear more from more Europeans here in the United States, create connections, and see how this could become a source of motivation for something new and innovative – a company, tech product, creative production, or something unimaginable,” said Laube.

Feel free to visit Valev Laube’s recently redesigned website including more information about each of the productions mentioned above or get in touch on LinkedIn.